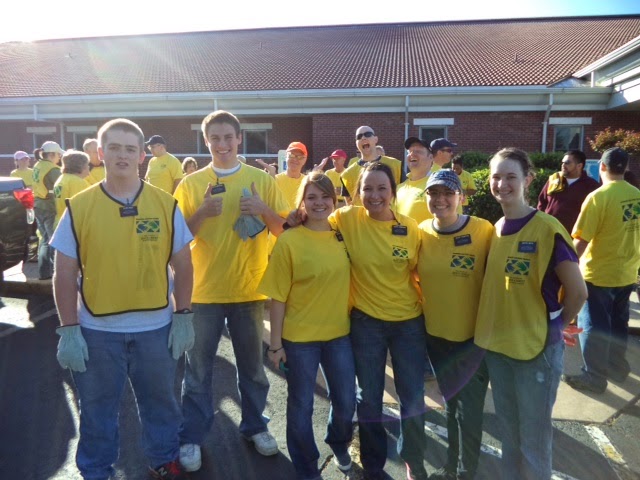 My niece, Katie Anderson, is serving an 18-month LDS mission for The Church of Jesus Christ of Latter-day Saints in the Arkansas Little Rock mission. On April 27th, she and her missionary companion live in Maumelle and were awakened to “insane thunderstorms that were off and on all day," but they went about their normal routine as good missionaries do.

Later that evening they decided to stop at an apartment of a senior missionary couple . . . a miracle for sure. Suddenly emergency sirens went off, but for them this was “pretty normal once a week,” and then the sirens got louder and louder. After a call from their mission president to “take shelter NOW!” they did so in a bathroom and the couple took shelter in the other bathroom. 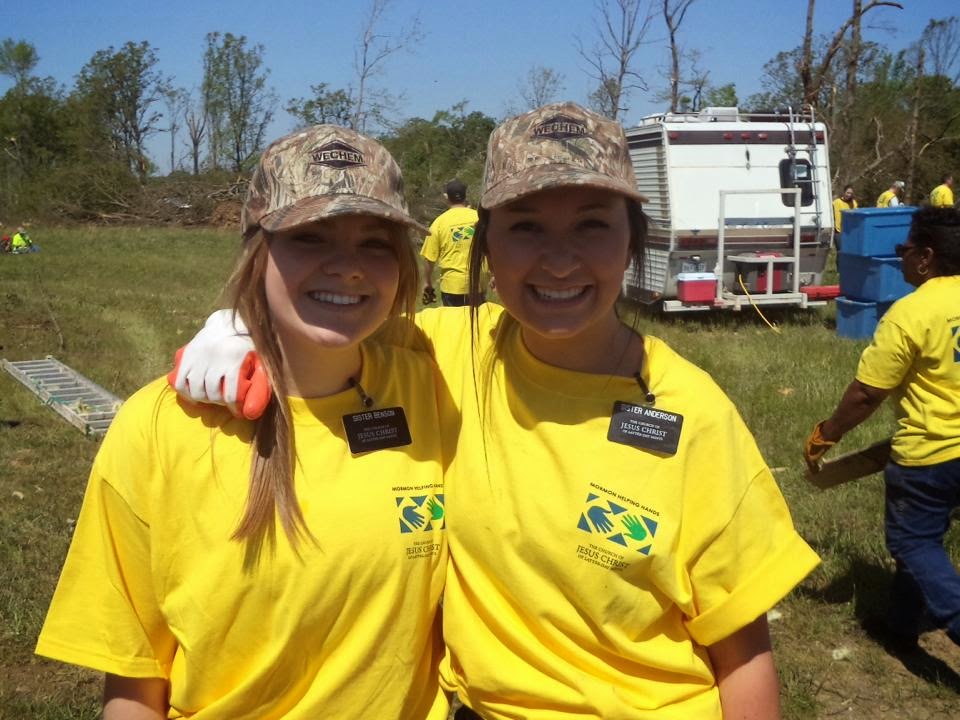 “Then we got another text from President saying ‘Tornado has touched down and is headed your way’... You can imagine the screams from 2, 20 year old girls locked in a bathroom. We dropped to our knees and prayed, then laid down in the tub . . . while singing Primary songs. I think it was the only thing that kept us calm. Our phone was blowing up with calls and texts from other missionaries and I was on the phone with another Sister when the power shut off completely, including the phone towers. It was the quietest Arkansas has ever been! The sirens kept going and going and finally shut off. We got out of the apartment in enough time to see a little bit of funnel cloud headed northwest from here... The Twister took out the neighboring towns of Mayflower and Vilonia.” 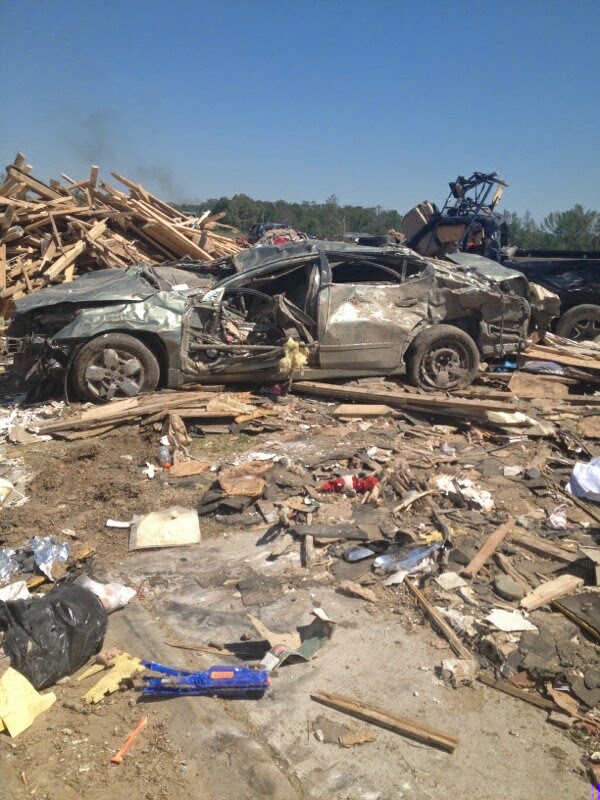 Saturday, May 3rd “over 1500 members from the NLR (North Little Rock), Little Rock, Searcy, and Fort Smith stakes came together with the yellow helping hands shirts to clean up the Tornado damage. I have only seen natural disasters on TV but once you are actually in the aftermath...you know the definition of devastation. It was literally a war zone. There was piles of debris burning everywhere and valuables in piles where homes once stood." 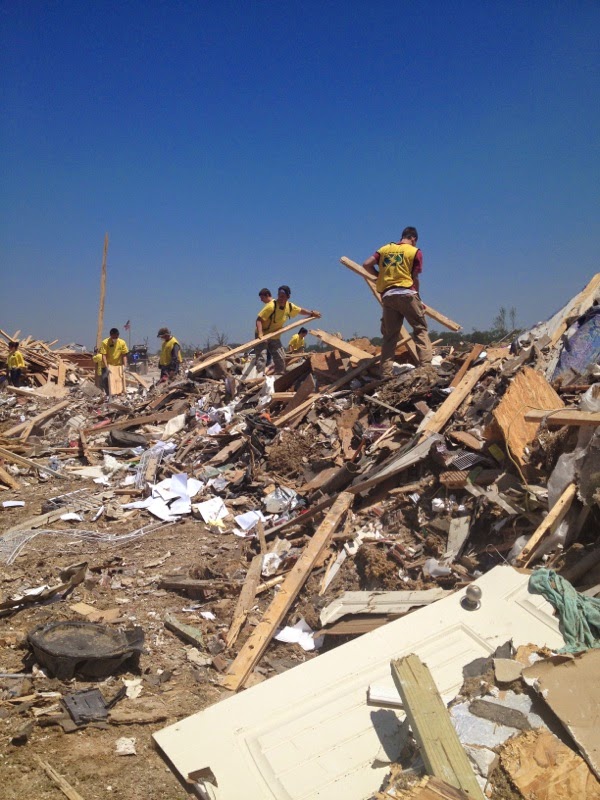 "We started in Mayflower at one home going through items we could save including a bunch of fine china plates! (MIRACLE).. and then we went out to Vilonia to help in a subdivision. That is where the emotions hit. This entire subdivision was impacted. Many lives were lost there. Plus there are valuables and clothes, toys, broken glass, etc...scattered in fields behind the homes. 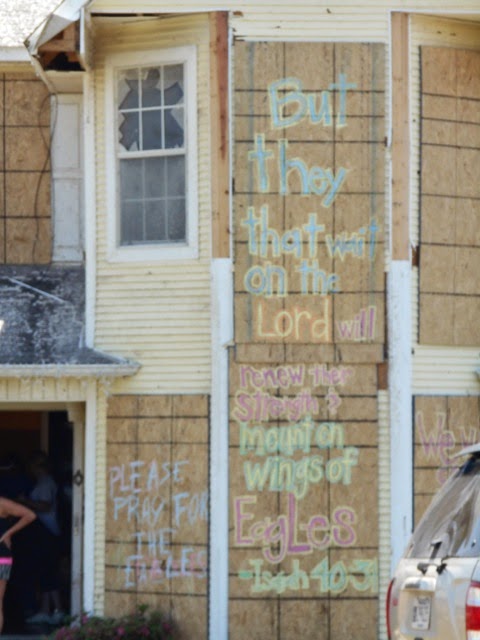 "The whole day is one I will never forget. We were able to help where a home once stood of a member named Dan Wassom who died a hero, protecting his wife and 2 little girls. Another miracle is that another Sister Missionary was able to spot an old missionary name tag connected to a picture of him as a missionary of another member who lived in that neighborhood. So awesome!

From my research before the mission, I found out that Arkansas was the 6th worst state for Tornadoes in the nation but from this damage I would rate it the first. This is the 2nd worst in the States entire history. I can't even describe the spirit that is felt in AR at this time. We are in need of a lot of prayer, and a lot of help. We will probably be heading back out next Saturday for more sun burns. My pleasure though...these are times I won't forget. I am extremely grateful for the knowledge of the gospel and plan of happiness.”


We are so grateful that these sister missionaries are safe and that they are able to lend a helping hand. I love these young adults who go out to serve and deal with the impossible. Sister Katie, Aunt Valerie is praying for you and those who lost family and homes. 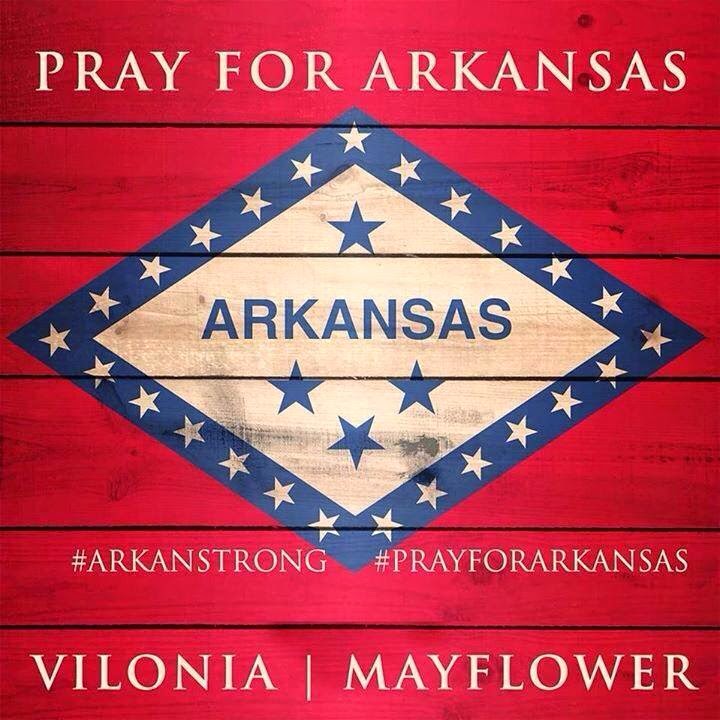