Finding Members After the March 11, 2011 Earthquake in Japan

An article caught my eye in the LDS Church News about the 9.0 earthquake and powerful tsunami that struck Japan last year. I was reminded how blessed we are to have an organized church with priesthood leaders, home teachers and visiting teachers who watch over us. We don't have to worry if someone will or won't find us after a disaster. We will be found.

More than 15,000 people died in that disaster. However, "4.4 million households in northeastern Japan were left without electricity and 1.5 million without water." (NPR) Can you imagine trying to account for that many people after a disaster? But even during the darkest days in Japan, let me share how some of the priesthood leaders found their lost sheep.

In Nagamachi, Japan, for example, Bishop Tatsuya Otomo had no way to reach all the members of his ward. So he placed a large board outside the LDS Meetinghouse and asked members to sign in and report their status and the status of fellow Church members. "This was a fast method to confirm the safety of people," he said.

Members would look at the list and then "walk or ride bicycles to check on other members." Within weeks, local leaders had accounted for every member.


"It was difficult. ... We didn't know where they were," Bishop Otomo said.

When everyone had been located, Church members then rallied together to help each other. On March 20, a week and a half after the disaster, ward members brought their food storage to the meetinghouse for use by members in need.

"We had one sister whose husband was not a member of the Church," Bishop Otomo said. "Still, she donated all of their rice. Her husband said, 'Go ahead.' The members really helped and cooperated. We were all victims of this disaster, but everyone came to help each other."

Bishop Otomo said he saw hope and resiliency rise from the destruction. "One sister said to me, 'My house is completely gone. But I can't take it with me to God. So it is not important.'" What is important, she added is that "'I have had the opportunity to serve others.'"

And here is another story of how a branch president went looking for a member.

Branch President Koki Yamazaki began worrying about the members of his branch. There was no electricity or telephone or cell phone service. Food, water and gasoline were in short supply. On March 13, President Yamazaki borrowed a scooter from a Church member and started towards Kesennuma, home to Sister Yoshiki and another Latter-day Saint sister. 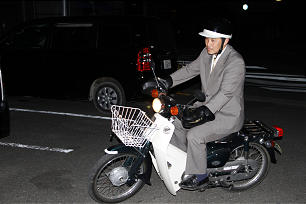 "The roads were destroyed," he recalled. "The situation was very bad." He went from evacuation center to evacuation center looking for the women. Finally, he learned they were safe, but was unable to find Sister Yoshiki or see her in person that night.

President Yamazaki put the little gas he was carrying in his tank and drove home. "The gas level went to full," he said. "I really felt this was a miracle." Two days later, he knew that he still needed to find Sister Yoshiki. With limited gas in hand, he set out again for Kesennuma.

After considerable searching and effort, he found Sister Yoshiki and offered her a small bag of rice. "I knew this was God's help," said Sister Yoshiki. "No man could have done this. He really was an angel from God." LDS Church News

These stories and others like them make me ponder, who is our neighbor during a disaster? Will we need to search for the children across the street if their mother is at work? Or the people in the grocery store if we are there? Or those at the office if we are there? Just a thought.