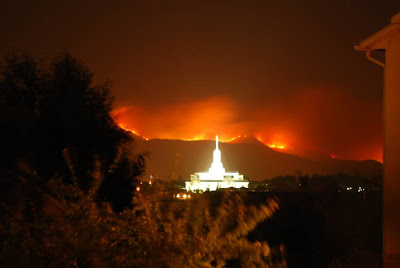 After watching the first news report of the Herriman Fire in Utah on Sunday, September 19, 2010, I suddenly remembered that our friends lived there. I felt some concern and quickly called them. The seriousness in the voice of her husband concerned me. We spoke briefly and hung up. Then I remembered I had an evacuation list on my computer. I felt I was moving in slow motion as I emailed them my list, but I knew they probably were not sitting at their computer and would not get it in time. 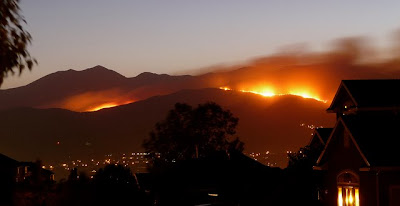 I needed to hear my friend's voice and called again. This time she picked up and told me what was happening, and that they were packing up. She told me what she was taking and asked if she was doing okay, or had she forgotten anything. I was a bit stunned that she was asking ME, the preparedness blog writer whose brain was all jumbled.

After sharing a few more ideas and telling her she had done a good job, she told me she loved me and hung up the phone. It was then that I cried. Too close to the home in my heart! Praying for them calmed my nerves, but when something like this happens to people you are close to, it is not easy. Even writing this is bringing back memories and making my heart race again. I immediately revised my Evacuation List for others, and posted it quickly on my blog. I had over 1000 visits over the next few days.

Feeling helpless, I stayed glued to the news reports for the next few days. Our friends were able to evacuate, and their home was saved, but the fire was on the hill directly behind their home. Lots to cleanup afterwards. With her permission, I share part of an email she sent me the day after the fire in hopes that it will motivate some of you to prepare to evacuate from anything. 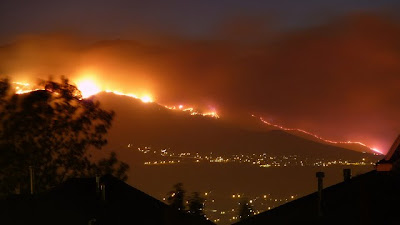 I thought you might be interested in a few observations and/or lessons that we learned through our Herriman fire. At the time of evacuation, we were having a birthday dinner for our son. We noticed the smoke on the hill. We drove up the road about a mile to the reservoir. Many neighbors were there. We were in our church clothes but I didn't have my shoes on. We got out of the car to watch. The attitude of everyone was pretty carefree thinking this is so strange so close to home. Then all of a sudden everything changed. The wind picked up and the flames crested the hill. Everyone literally scrambled for home. I felt so unprepared for what was happening. Because I was without shoes, my husband carried me to the car.

"The grandchildren were very scared and cried quite a bit. I felt bad that I couldn't take the time to console. We did gather in family prayer (our granddaughter's suggestion). I was grateful that I had just put the majority of scrapbooks in bins. That helped a lot. It helped that I had so many helpers with me. One of my married daughters grabbed collector's books from the bookcase. And another grabbed heirlooms from the hutch. I dug through my cedar chest.

"It was a mistake to have insurance papers in one place downstairs and other documents upstairs. We literally pulled out all drawers in the file cabinet. I definitely need to organize that better. I told my 12 year-old daughter and 17 year-old son to pack for one or two days and be prepared for school. My 12 year-old had a project due and parts were spread between 3 different cars-not good. I told her to pack for the dog (thanks Val) and we packed our meds (thanks Val) but--- we forgot toiletries and pjs and enough clothes. We were out longer than we were prepared for personally. I wanted a toothbrush!

On Monday, we had no place to go. We had found a hotel the previous night that would take our dog. Thanks to our daughter's friend. Hotel rooms went fast and her parents reserved it for us. Anyway, on Monday we went to the Red Cross Center at the High School. I wasn't impressed. Definitely better to have your own 72 hour kit. We didn't because they were too old from Riverside. I had downloaded the list to re-stock them during general conference. Oh well.
I guess what I realized the most is how unsettling this is emotionally. Even for the adults. I am so grateful that all turned out, except for the 4 families. At the time of packing, I didn't realize how much sentimental things and pictures I have collected. I'm going to get them on the computer and start handing out these items to the older kids. It should never be all in one home. By the way, our son-in-law was quickly going around taking pictures of our belongings for the insurance if we needed it. I thought that was smart. I really was blessed not to be alone. Anyway, sorry about the book. Thanks again for all you do in preparing families."
D.S. Herriman, Utah