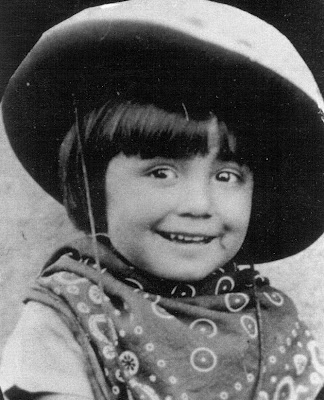 A darling picture of my mother, age 3

I know I've been saying this for a loooooonnnnng time that I need to back up my pictures onto a flash drive. But, I haven't. It's because my husband said we have a backup on another computer, which we probably do. However, what if I needed to leave home and just wanted to take something small?

I have a friend whose house burned down while she was gone and she lost EVERYTHING. It was so devastaing. I still remember walking on her property where everything but the chimney and refrigerator were gone. So, prepared little-old-me got up this morning to back up my pictures. I had purchased an 8 GB Sandisk flashdrive from WalMart for $19.95 about a week ago. See, I was thinking about it.

So, first I put my memory stick from my camera into my CPU to download the last pictures from my camera, and . . . nothing happened. For some reason it was not being recognized. That wasn't a good feeling. Maybe it's time to replace the memory stick. I found the cable for my camera, turned on the camera, and plugged the other end into the CPU. I transferred the few remaining pictures from Thanksgiving and Christmas onto my computer. Whew!

Since I wasn't sure if they would all fit, I transferred one decade file at a time starting with the oldest. I knew that the 2000's would take the longest. So I transferred one year at a time. Here's what I learned. 8GB is NOT big enough for all of my files! I right-mouse clicked on my Family Pictures file and could see under Properties that I definitely needed something bigger.

My bright teenage son says I need a portable external hard drive. Hello. For $69.88 I can get a Toshiba one that holds 250 GB! That's enough to hold all of our old pictures, and videos for years to come. I'm sure all of you knew that. I'm pretty ancient. So, it's back to the store for me. 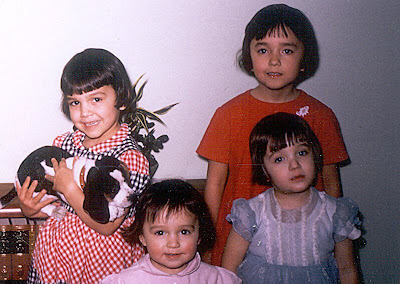 Me (in the front) with my sisters
Tips: I organize my pictures in files on my computer like this:

Another tip. I have so many old cameras that it's easy to mix up the cables and cords. So I use my DYMO label maker, and put a label on each cord designating which camera it belongs to. Great for other cords as well. I think it's time to donate some old cameras.

Also, another idea is to send your pictures to a photo website that can hold all of them. That way they are somewhere else. Probably cheaper than my plan. Have a great day!