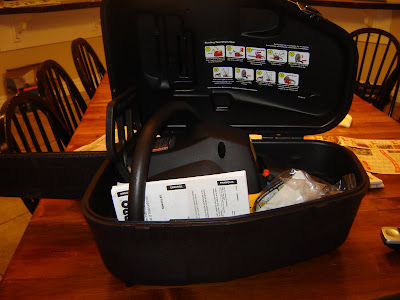 I was looking over the Sam’s Club auction the other day, and saw chain saws up for auction. End of the summer clearance. I thought, “Wouldn’t it be nice to have one since we live in an area with lots of trees that need trimming every year?” It would be nice to not borrow or rent (about $60 every time). I know you’re probably thinking, “What in the world does she know about chain saws?” Pretty much nothing. Except that it could be useful. Having said that, I began to bid on a Poulan Pro 42cc Gas Chainsaw 18.

I told my husband I was bidding on a chain saw. There was a long pause as he began processing. I told him that I had set a limit. Another pause. I told him, wouldn’t it be nice to not have to borrow and break someone else’s? And so the serious bidding began.

I’ve purchased things on Ebay before so I understand the bidding process. I figured Sam’s Auction would be similar. The main thing is you 1.) do some research (Amazon.com or Consumer Reports), 2.) figure out what the item is worth to you, and 3.) set a limit for yourself. AND STICK TO THE LIMIT. I also did some research on bidding, and found that you should never bid on the first and last items, if there are several items open for bid. This way you can see what items are selling for.

I scoured the internet for information on my chain saw. Mixed reviews. I found that this Poulan chain saw retailed for $170 - $280, so I figured that if I could get it for about half that, I would be doing okay. Well, I kept losing my bids. Most chain saws at the auction were selling for $120 and $140. I told the kids that all these men were bidding on chain saws and didn’t want me to win one! So, for a few days I watched often, set my high bid, and lost again. Then, I decided that if it was meant to be, I would win. So, I bid one more time. And lo and behold, I won! Somehow I won it for $111.00.

In all seriousness, a chain saw is very useful in many emergency situations: storms, hurricanes, earthquakes, fires, etc. Hopefully, our chain saw will prove useful over the years.

“Wielding chain saws and moving tons of debris, more than 200 volunteers from The Church of Jesus Christ of Latter-day Saints — many dressed in the Church’s familiar “Mormon Helping Hands” T-shirts — helped clean up areas in Alabama and Georgia affected by last week’s tornadoes that left a trail of death and devastation.” 5 March 2007, Church Newsroom

“The buzz of chainsaws will again fill the air this weekend as thousands of volunteers from The Church of Jesus Christ of Latter-day Saints descend on the Gulf Coast to help victims of Hurricane Katrina.” 15 September, 2005, Church Newsroom